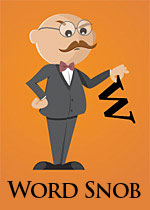 Fast and loose with the language

Fast and loose with the language

It's a slow Saturday afternoon and the Word Snob, Yours Truly, or "I," as the writer of these words might refer to himself if not for his love of the more pompous but less appropriate "third person perspective," is awaiting the upcoming running of tonight's NASCAR race. It will be shown not on the Speed Channel or ESPN but on ABC – television for the huddled masses. The race is part of an exciting 10-race playoff called “The Chase.”

My slow Saturday is about to get fast.

I suspect that this sports-viewing confession is yet another shock to my legion of fans and disciples. Yes, Virginia, the Word Snob follows NASCAR. And loves it. And gets in at least one conversation a month on how NASCAR is not ignorant.

And since I have this keyboard, an unlimited supply of electrons and pixels, and your rapt attention, I will go on to make an airtight case for this fact. And I say "fact" because it is not a premise, nor a theory, nor supposition nor hypothesis but, indeed, a fact. We'll get to that later because our column today must get back to language, specifically, American English. Even more specifically, we must make some entertaining and thus compelling points about properly spoken American English because the column is called Word Snob and not Sports Snob. (And who are we kidding? I'm charging right out there, in my first mention of sports, and revealing my love of NASCAR. How could I expect to pull off a credible sports snob persona?)

Why do people watch car races in general and NASCAR in particular? Many learned as well as common folk say it's for the wrecks. We say we don't want anyone to get hurt, and yet it's the wrecks that get the instant replays. Fair enough.

I, however, admit to watching and listening for the absolute and utter carnage inflicted on the language in nearly every minute of the broadcast. One could find this anywhere, especially where I live, but what's fascinating is its juxtaposition with an intelligent and exciting sport. Abysmal use of the language doesn't interest me on the street. Its legitimization on national television, in a billion-dollar sport loved by fans South and North, East and West, is truly amazing. And here's what I mean:

"We haven't run as good here as we have at some other tracks." That was Dale Earnhardt Junior, the sport's most popular driver whose followers comprise "Junior Nation."

Here are a couple by Larry McReynolds, the high pitched commentator: "He had went 14 laps before he cut down that tire." And "That's two drivers that very badly wants to win this race."

I'm not making this up. I'm sure I couldn't.

In every other way, oval-track racing is as intelligent as any other sport.  The engineering rivals that of the space program. Strategy is complex and nail-biting, with the pit crews and chiefs calculating fuel mileage, tire changes, chassis adjustments and a long list of other variables that change with every turn and twist and crash of the event.

In many ways, NASCAR is even more intelligent. Take, for example, the pre- and post-race interviews. Junior's conjugation notwithstanding, most drivers can conduct a 3 minute conversation that's leagues above anything you'll hear from the typical stick-and-ball athlete. They also manage to don the cap, drink the beverage and sprinkle in the names of a half-dozen or more sponsors. It should be noted as well that there is no longer a preponderance of drivers with a Southern twang. Matt Kenseth is from Wisconsin, as is Danica Patrick. Jeff Gordon and Jimmy Johnson are from California. Denny Hamlin is from Tampa, Florida, which is not the South. Tony Stewart, Indiana; Brad Keselowski, Michigan. Greg Biffle is from Washington the state and Marcus Ambrose is from Australia the country.

It is only the announcers and their disregard of proper usage or, I contend, the actual cultivation of hick speech that allows NASCAR to retain its redneck stereotype. Formula One, Grand Prix, Indy Car are all considered more sophisticated sports. Their "road course" approach involves right turns as well as left. But more importantly, their announcers speak with overly prissy British, Scottish or French accents. Their race cars are prissy also. And yet no one watches.

It is the casual, colorful, colloquial and laughably improper speech that makes  NASCAR so adorable. It is a sport of the people. Stock car racing rose to national prominence in 1979 when the Daytona 500 was broadcast on ABC's Wild World of Sports during a blizzard that blanketed much of the East coast. As an added treat after the race, Cale Yarbrough slung off his helmet and took on Bobby and Donny Allison in a fist fight. A new fascination was born. "Let's watch those rednecks from down South race cars and fight."

Today NASCAR, despite being "redneck," leaves the open-wheelers in its dust. And thus it is way more lucrative. Ask Danica. She frequently won Indy-car contests; today she struggles in the second tier in the ovals. But she's making more money.

And despite having an endless supply of electrons and pixels, I have a paucity of patience. Therefore, I will get to my point (besides, the race is about to come on): Language is incredibly important. It can make a sophisticated, exciting, international sport seem redneck. Unfortunately for me, it also seems to say that proper usage is not popular. Regular people don't care if you talk good. In fact, they seem to prefer that you don't.

Please don't be that way. You can speak like you have some sense. You can write with your full intelligence. And you can still enjoy the race.